Have you seen Shah Rukh Khan on TV sitting on a terrace in a couch, hair flowing back in the wind, asking the world why they are content with their current cable connection, and aren’t switching to DishTV immediately?

Remember what he’s been telling us lately? “Aasman me live Dish TV…”

So, in India the only airline which offers in-flight television is Kingfisher, and what I see there is no live TV. No sir.

KF’s in-flight entertainment list contains NDTV Good Times, a Hindi movie (on air premiere), a channel showing Star One or Star World, an animation channel, an English soap, maybe one or two visual channels and some ten radio channels while the screen shows a map or information screen.

And none of those channels are showing anything “live”, that is what the people down there on the ground are able to see through their cables, Dish TVs, Tata Skys, Big TVs etc. It is programming that is pre-set for the flight. And what is worse? The content repeats. For each flight that flies in a day, the content is identical.

How do I know this? At times I have to fly Kingfisher twice or thrice in a day, and I find the same Friends/Khichdi/Sarabhai vs Sarabhai episode running on the Star entertainment channel, or the same feature on the NDTV Good Times channel, the same “premiere” movie, the same cartoon film. So the entertainment is entertaining in the first flight, but in subsequent flights during the day, it gets stale.

Anyways, the point is why advertise something (and give the public guilt over it), when it is obviously not true? Why lose credibility?

I love Tata Sky. They keep making ads that I can keep writing about.

First they claimed to revolutionize home entertainment, never mind that what they are providing is just improved signal fidelity on what the local cable guy anyway has been providing us for decades now, with an ad depicting people throwing out every home entertainment device they had (including television sets??!!??). Then they thought that a man dressed in grass along with a Hrithik Roshan was a funny way to depict the public’s affinity with cricket. Then it was the cartoons trying to bundle a Tata Sky box with a television set in an unbreakable bond. Never mind that those who threw out their TVs after seeing the first spot are still wondering where the picture appears on the new Tata Sky box they bought. Then it was the education campaign with the little Einstein spots – which was cute and made a good connect. And somewhere in between were the nice, simple and classy endorsements by the likes of Boman Irani and Kiron Kher – remember them standing on a stage in front of curtains reading a feedback letter in a microphone? Then came the 1500 /1499 kasamm se ad, which was hilarious and made an instant connect.

I thought they were improving. Then suddenly, we hear a jingle – “inke saath rahne ka raaz…” in an ad targetting family with choice-led togetherness (!!??!!) And after boring us with that irritating ad in a variety of lengths, they are back with the education focus. After that lengthy intro, let me describe the ad to you.

A kid who is happy to see bubbles, a ferris wheel and to get quite a handful of lollipops comes to share his glee with his father. In each case, the father connects the kid’s activity with some facet of education – like “colors batao…”, “ginke batao…”, “shape batao…”. Every time the kid gets a little disappointed and sad, and finally breaks out into tears.

A voiceover tells us all that kids should have fun in order to learn. Ergo, we should all take a Tata Sky to let our kids learn while having fun.

But I thought learning how to count was more fun if I was counting real soap bubbles rather than counting with a badly-designed interface with numbers in comic sans! 🙂 And learning about shapes was more fun and done better with seeing shapes in real life. And that making the child learn in the real world is preferable to binding your child to the “idiot-box”.

And anyways, the child in the ad was not crying because he found this way of learning wrong, but because he did not want to learn while he was having fun. So what are the odds that he would like to “learn” with the television? The “solution” proposed by the ad is not really a solution, it just transfers the problem from outdoors to indoors.

Read the headline on the next frame. Can you believe it? Yes, India TV has found that the legendary Sudarshan Chakra of Lord Vishnu is not a myth but is a reality. 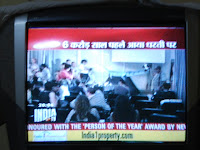 How does the channel get to this conclusion? By getting a piece of news that paleontologists have found a head of a crocodile which lived around 60 million years ago, and was killed by a sharp object which severed the head from the body. Ofcourse this could not have happened other than the mighty Vishnu killing it himself, according to a fable (The one where the said crocodile catches hold of an elephant, who happens to be Vishnu’s devotee. The elephant, seeing inevitable death, cries out his Lord’s name, and Vishnu comes running barefoot to save his devotee, and to achieve this end, uses his Sudarshan Chakra to cut off the crocodile’s head).

The deeply religious folks at India TV saw this as proof that the fable actually happened. 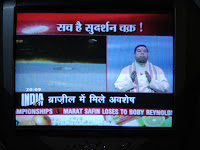 Even though the head was found in Brazil, while Vishnu is an Indian deity. 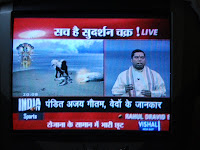 Who is the expert they are consulting here? A certain Pandit Ajay Gautam, who is apparently an expert on the Vedas.

No, they don’t feel the need to consult, interview or publish words of the team who is supposed to have been involved in this excavation and is responsible for this discovery. Not their opinions, not their clarifications, not what they derive from this, not what impact this discovery could have on their field. And no, they did not flash or tell us the names, identities or even nationalities of the scientists involved in this. 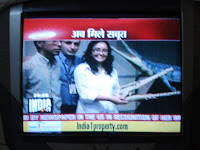 The story carried no identifiers using which we could search for more information on this excavation. Only low quality video footage of some people holding a crocodile head’s bone structure. And repeat “flashing news” snippets that the mighty Sudarshan Chakra has been now proven to exist. All with ‘expert comments’ from Panditji who is an expert on Vedas, not paleontology, carbon dating or archeology. 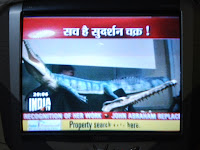 So dear friends, if you are an atheist, start repenting now, and if you are an agnostic, don’t be one – here’s proof. Courtesy Indian news television 🙂

Tata Sky after its 1500 pricing advertisement has come up with a bubbly upbeat spot comparing two families. One stays together, does everything together and is very happy, while the other is not happy and not together. The head of the latter family peeps through a keyhole presumably on the door of the former, and finds the secret to their togetherness – Tata Sky. We are then treated to a series of shots showing the benefits of Tata Sky and that these benefits would keep our family together.

But wait a second… the features all point to one thing – the choice and variety Tata Sky offers – the games, the “mandir darshans”, the special sportscasts. Off the top of my head, if my TV offers all these, and members of my family have interest in these things, would they sit together to watch TV? Does the TV show each of these items to its respective fans+recipients? Or do we have to flip channels to switch to either of the content streams? The latter is no doubt the case, and in that case, I don’t think you’ll get a family which would sit together to watch TV, not atleast because of the variety that’s on tap.

Does the Tata Sky ad then seem to hint at the right “benefit” arising from its variety?

Two friends chatting in a party, and their wives just disappear one by one. Sounds like a scene from a suspense thriller, right? Well, this story has got suspense, drama, humour and a very clear message for all of us. Surely it’s a superhit movie!

That’s how the new Tata Sky advertisement goes. While Dish TV is still using a celebrity to sell category benefits, Tata Sky has moved on to assuming that it is a well-known brand in an on-the-way-to-be-established category (correct on both counts), and instead focused on that P (out of the traditional four we know) which is probably the only reason the category isn’t taking off like it should, given the benefits it is providing – price.

More of a tactic than a strategy surely. Instead of bundling a six-month maxi-subscription in an installation package which costs around three to four thousand rupees, Tata Sky has stripped down its offering to offer just the installation at an attractive price of Rs. 1499, plus whatever. Key point is, the advert attracts you quite well.

What do you think?