One of the monkeys we met on our excursion to the Borivali National Park back in 2009. 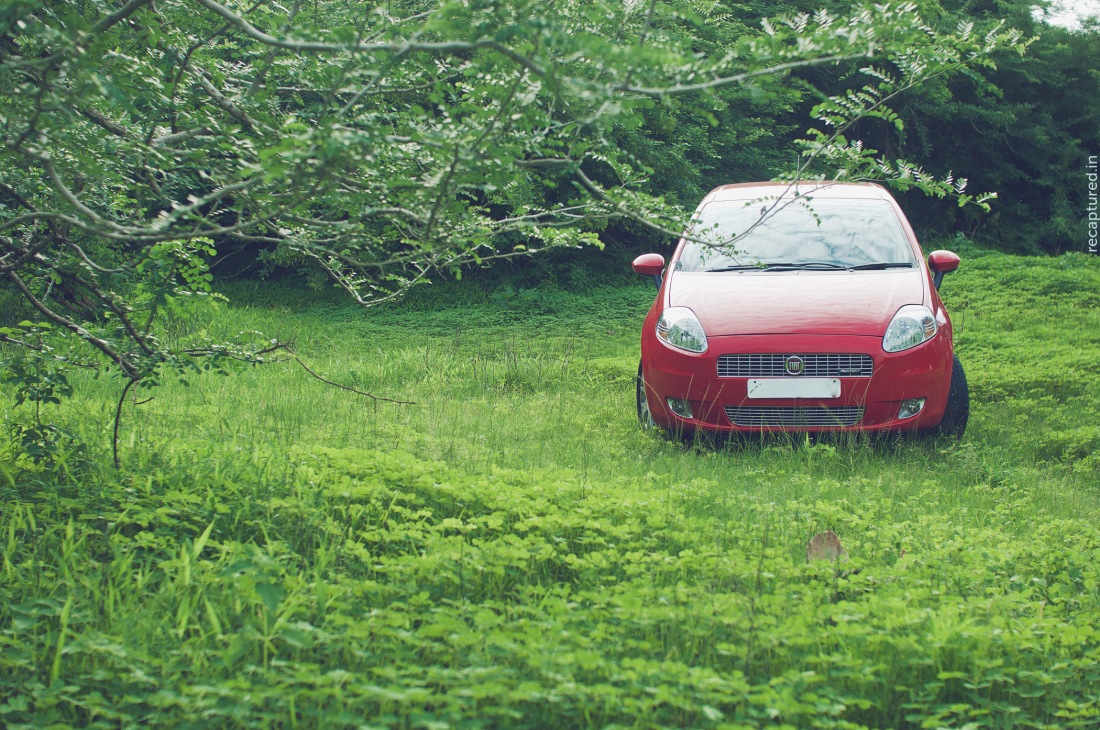 In 2012, Shreyas, Rajat, and I picked up our respective cameras and took Shreyas’s latest new Fiat Punto for a spin around the greenery in Pune.

We had a great collection of pictures between the three of us, which has managed to stay in our respective hard drives so far.

Finally, I publish part 1 of my album from the day’s shoots.

Now I challenge both Rajat and Shreyas to publish their sets.

It rained that day. And drizzled for long stretches. Mother Earth was happy. It was green all around. And in that ocean of green, we put a speck of red.

It is the route that touches the three seas that surround India. The highlight of the route is Kanyakumari, where we will see all the three, the Indian Ocean, the Arabian Sea and the Bay of Bengal together. Then there is the Bay of Bengal at Pondicherry, the ruins of Hampi, scenic Coorg, the Arabian Sea all through the Konkan coastline and a short and sweet day spent at Goa.

There is no change over the last route we posted. It has only been fleshed out a little and a few errors corrected.

To: Murud
A striking beach, and the commanding fortress of Janjira, which is simply India’s most spectacular island fort. But we wouldn’t be stopping here beyond a couple of hours plus the time needed for us to ferry to the fort and back. Because we have to get further

Day 2
To: Mapusa
For a short & customary stopover at Goa, and a night halt at Madgaon.

Day 3
To: Gokarna
Gokarna – or the cow’s ear, is a small low-key village, with temples and beaches, the best beaches being those reached via a footpath that begins on the southern side of its Ganpati temple.

Day 4
A day well-spent negotiating the roads of the Konkan Ghat, getting us to Mangalore, where we explore the city and then stay for the night.

Day 5
To: Coorg
Coorg, or Kodagu, is known for its cool climate, winding roads, rambling over forested hills and past spice and coffee plantations. There are some forts, temples, and a waterfall to see apart from the breathtaking natural beauty.

To: Kunnur
It may be a small and unexciting town otherwise, but there is Kerala’s most popular ritualistic art form, theyyam that belongs to this place. Apart from that there is a Portuguese built St. Angelo Fort, built of brilliantly red laterite stone, and gives excellent views of the surrounding beaches.

To: Kozhikode
The port where Vasco Da Gama landed in 1498, while on the voyage to find the sea-route to India. There is not much to see as a tourist, but is a good place to take a break, which is exactly what we plan to do here.

Day 6
To: Ernakulam
It’s next to Fort Cochin, another laid back town, famous for its port.

To: Kollam
A quaint little town, which is also an entrance to the Backwaters

Day 7
To: Kanyakumari
Imagine a place where you can see India’s three big surrounding water bodies meet! The place where land ends!
Kanyakumari is the “Land’s End” of the Indian subcontinent. Here the Indian Ocean, the Bay of Bengal and the Arabian Sea meet. Among other things to see is the Vivekananda Memorial, where Swami Vivekananda had meditated in 1892 before becoming an icon to the Indian/Hindu public.

To: Sivakasi
From Kanyakumari we move off to Sivakasi and spend the night in the house of fireworks in India.

Day 8
To: Madurai
Madurai – the home of the Meenakshi Temple. According to ancient documents, this city is 2400 years old, and was an important trade hub, especially for spices. You can imagine us photographers going mad photographing the temple, and the local people.

From here we push off towards Chidambaram for a night halt.

Day 9
To: Pondicherry
Pondicherry is the pocket of French culture and architecture in India. Apart from its calm and relaxed lifestyle and French connections, it is famous for the Auroville – the ashram of Maharishi Aurobindo.

The road towards Hampi would take us to Tannakallu, where we plan to stop for the night.

Day 10
To: Hampi
Glorious Hampi! The fascinating ruins of 15th century Vijayanagar make this place famous. In the legends of Ramayana, this place was called Kishkindha, the place where the monkey gods lived.

To: Sholapur
With 10 days well spent, we stay for the night in the small town of Sholapur.

Day 11
To: Mumbai
The beautiful drive back to Mumbai will be through Baramati, Pune, Lonavla and Khandala.