It is a regular question that I keep coming across.

People buy cameras, and then ask me which mode to shoot on for getting beautiful pictures.

Generally you ask this when you buy a shiny new camera, and while playing with it, notice that there is a dial on top with some letters and fancy graphical icons, something like this.

So what do you do when you encounter this dial? Turn to the green icon called AUTO and start shooting.

But then you get a nagging feeling after a few days that there is more to the camera than the green icon called AUTO. And you wonder why all your pictures look as bright as each other, and how there are other people using same or similar cameras who sometimes take nice low-key drama-type pictures, and then with the same camera also click bright sunny candids of their kids & dogs. There must be something to the mysterious icons and the even more mysterious letters on that dial, right?

That dial is your key to complete control over the machine you hold. Complete power. And this complete power is like the power a katana sword yields you, rather than what say Harry Potter’s magic wand will give you. Yes that’s right. It’s not supposed to (and it can’t) magically find the “correct settings” for “drama” when you are in a cave, and then set the camera back to “cheerful” when it sees a puppy running by. Even the so-called “creative modes” are nothing but ‘average seeking’ modes just like the AUTO mode but with a few minor tweaks here and there. How do you harness this complete power then? By understanding it fully. How? Read further.

There are around 10-11 settings on an average on any of these dials. The main ones (as you can see in the picture above: D90) are P, S, A, M, Auto, No flash, Portrait, Landscape, Macro, Sport and Night Portrait. Some cameras also have modes like playback and video record. In Canon cameras the S and A modes are labelled Tv and Av.

At the heart of it, there are only three input camera variables (and one output variable) that define the picture you see (apart from the ever-so-popular focal length, which is purely a function of the lens and sensor size). These are 1. aperture, 2. shutter speed and 3. ISO speed. These dial modes give you control over, or combination of these three to help you get the picture you want.

Auto is pretty obvious, innit? Set to auto, and press the shutter. Your uber-expensive SLR or bridge camera functions just like the tiny pocket point & shoots – it decides for you what settings to use, depending upon what it sees, and every scene is cut down to or bumped up to the same brightness levels.

No Flash is nothing but Auto with a flash override. Which means that even if Mr. Camera thinks the scene ahead is too bleak for handheld photography, he would not pop up the annoying flash to fill it up. 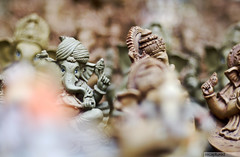 Portrait tries to keep the lens aperture as wide open as it can, so that you get nice shallow depth and blurred background, accentuating the subject.

Landscape does just the opposite so that more of the scene is in focus. In addition it might activate a nice 3×3 grid on the viewfinder/screen which lets you compose landscapes using the rule of thirds.

Macro is not really macro. It is a nice little fancy thing to give the impression of macro capability to those who do not know that macro capability is exclusively a function of the lens and its distance from the sensor.

Sport mode tries to keep the shutter speed fast so you can freeze motion.

Night Portrait pumps up ISO so that you can take decent pictures at night without aid of artificial light (read flash).

Enough about the so called “creative modes”. On to the real modes.

P is for programme. The camera has 4-5 programmed settings of aperture-shutter speed pairs, which you can cycle through using the dial on your camera. 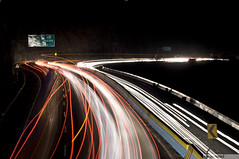 S (or Tv) is for shutter priority. It lets you select the shutter speed, while the camera adjusts the aperture so that the combination gives you the exposure value that you have selected. Useful when your first concern is how long your exposure should be, eg. while trying to click sports or raindrops (fast shutter), or while clicking star trails or blurred motion (slow shutter).

A (or Av) is aperture priority. It lets you control the aperture, or the amount of light reaching your sensor/film per second, and adjusts the shutter speed to get the desired amount of exposure. You would use it to control your depth of field and amount of blurriness or bokeh in the background (or sometimes in the foreground).

Finally the holy grail of photography. The mode that purists and puritans swear by. The one & only M mode! The simplest way to show amateurs tomtomming their super-long lenses around you on a trip that you are a god is to keep your dial at M at all times. In photography one-up world, you dial M for Magnificent.

So what does it do? It doesn’t do so much as it lets you do. You have full control over the shutter speed and aperture both, so you can get a picture of your puppy with shallow depth of field and nice creamy background, and also a low-down picture of the road where almost everything is in focus but the mood is dark and gloomy. You just need to know what you are doing. Or click 5 shots per picture you want. Or look at the exposure meter before clicking.

Well, it’s not entirely correct that M is the mode that lets you control everything. The S and A modes also let you control it, albeit in a different way. Remember I was talking about a desired exposure value? It’s not something the camera imposes on you. You get to set it! So when you are in A mode, and you want a very bright overblown picture, you set the exposure value higher than 0, so that the camera does not increase the shutter speed too much when you open up the aperture. You just press the exposure compensation button, which carries this symbol(

), and turn the main dial on your camera to adjust how bright you want your frame to be. So by letting you control the desired output variable, the A and S modes let you be in control.

All that is fine, but which one do you use?

It depends. Majorly on which lens I am using. If I am using my current favourite, the AI-S 105mm f2.5, or I have any of my lenses mounted on the extension tube, I am restricted to M. Which is not so bad after so much practice. But if I am using any of the other lenses, I switch to A and dial down the exposure compensation by one-third for daytime or by four-third for nighttime. Heck, even for specific long shutter applications like traffic trails, I just dial up the exposure compensation to around one-third above, make the aperture really small, like around f/9, and click with the help of a tripod.

Bottom line is, if you know what you want, you can do wonders with any of the three modes (M, A, S, maybe even P).