But then, advertising happened.

Take a look at the following two print ads for the brand: 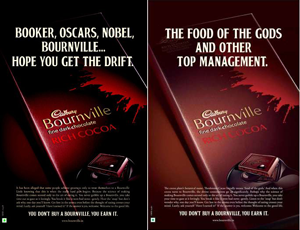 And then, this TV spot:
Link courtesy aFaqs!

All this has left me befuddled. With such finishing and the obvious amount of money spent on the campaign, what is the level of thought and creativity that’s gone behind it?

The positioning is simple: You don’t buy a Bournville, you earn it. So far so good. Shall we see what the “creative” has done with the idea?

In the first one, “Booker, Oscars, Nobel, Bournville… Hope you get the drift”, it took me a while to understand that they are trying to hook on to the “earn it like an award” idea. Oh right, Bournville is such an earnable thing as a Nobel Prize or a Booker.! And then “hope you get the drift”. No I don’t. You have to do better than that. Preposterous at its worst, unimaginative at its best.

Then I saw the TV ad, where a reporter tells us that the way to eat it is to break the bar (trying to own the sound), smell it (like wine) and then tells us of the “legend of Bournville”, again that “you earn it”, which according to him is British mumbo-jumbo. Then he proceeds to eat it without having earnt it, and gets lifted off by a giant bird, reinforcing the idea that “you dare not eat it without earning it first”. Hence, we know the agency is short of ideas.

Neither of the three ads have been able to give me any impression that Bournville is a premium product or that the advertising is smart,or at least clever.

To Cadbury’s: you earn your place in the consumer’s mind and in the advertising world, and this time you haven’t. Sorry.