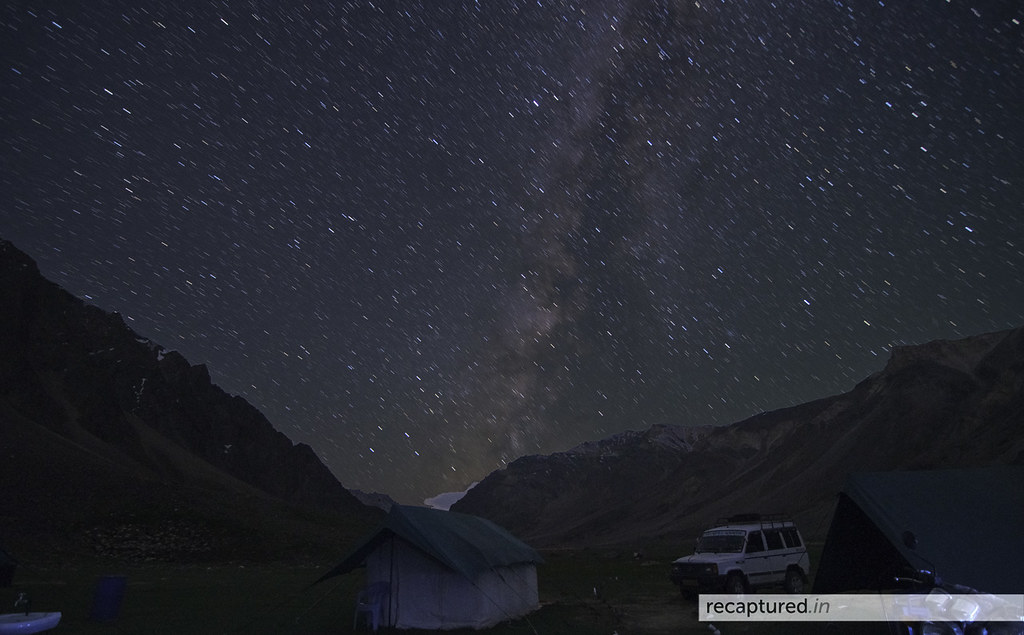 Via Flickr:
The galaxy we belong to. The Milky Way.

Southern Sky as seen from Sarchu 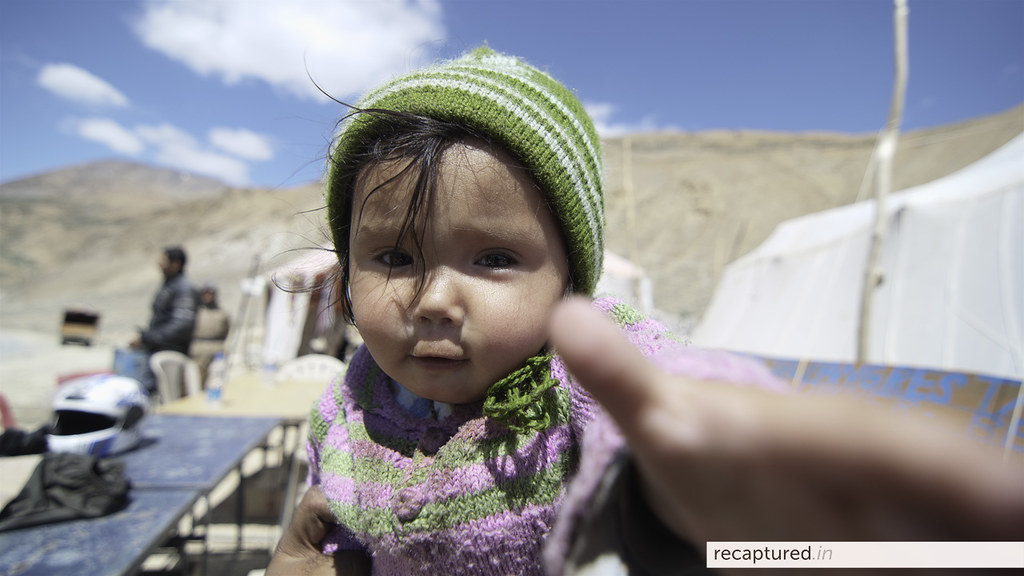 This cute Ladakhi kid became an instant friend of ours, sipping Slice from our glasses and playing with all of us, while her family prepared an early lunch for us. 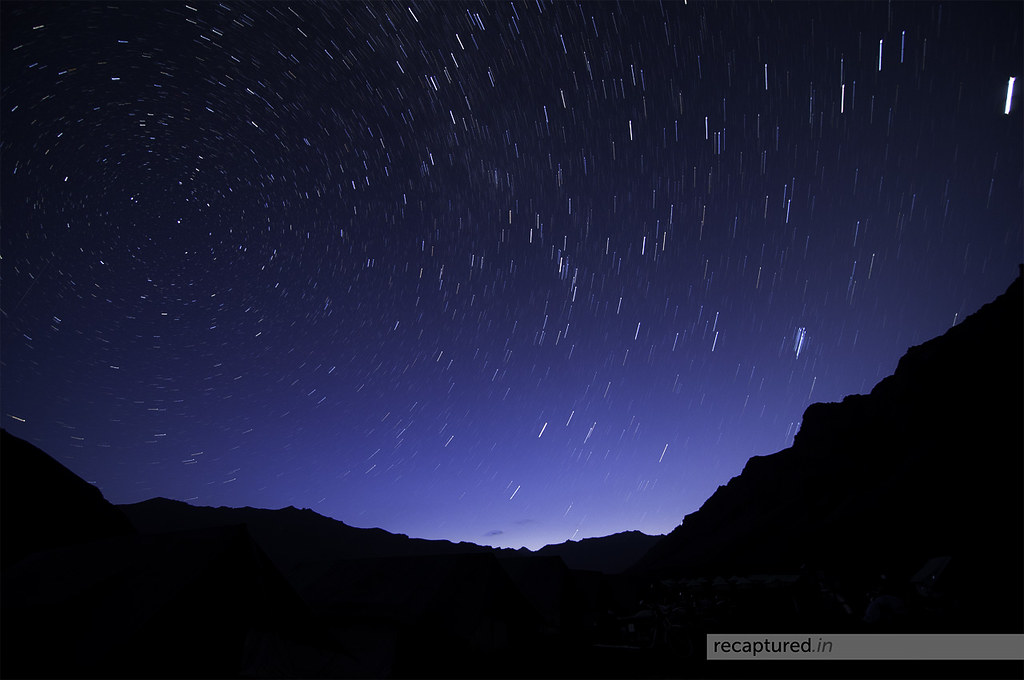 Via Flickr:
I woke up at 3 in the morning at Sarchu, partly to prepare for the long ride that lay ahead of us that day, and partly thrilled by the prospect of seeing millions of stars at once (you get to stay in tents at Sarchu).

Despite not having an intervalometer with me, I could not give up the temptation to click star trails.

So here it is: the Northern Sky as seen from Sarchu. 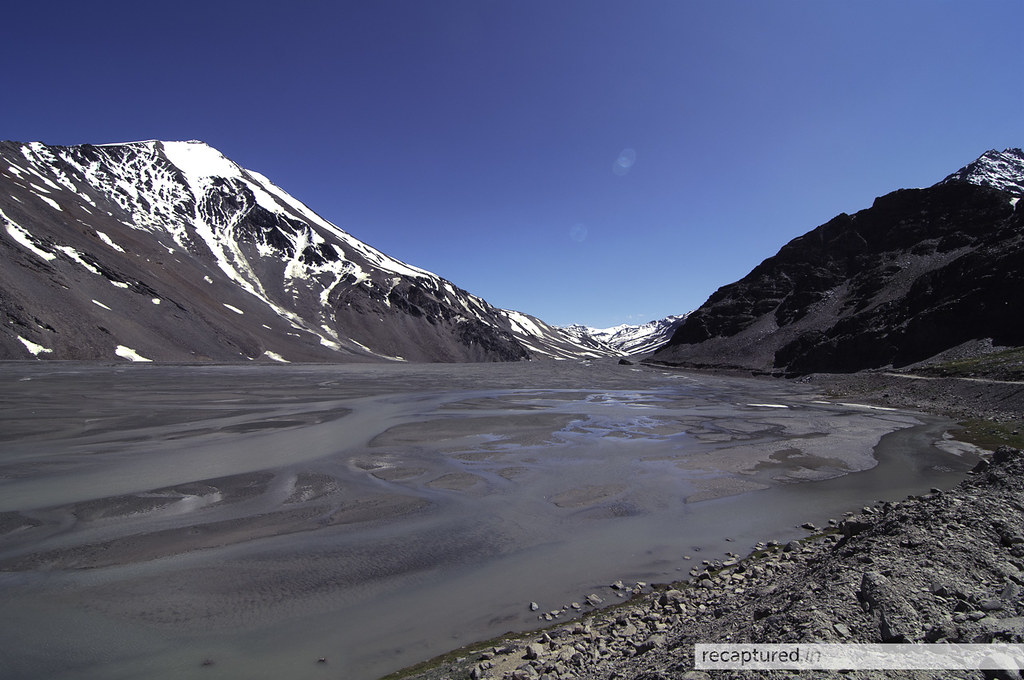 Just after crossing Barlach La, on the way to Sarchu. 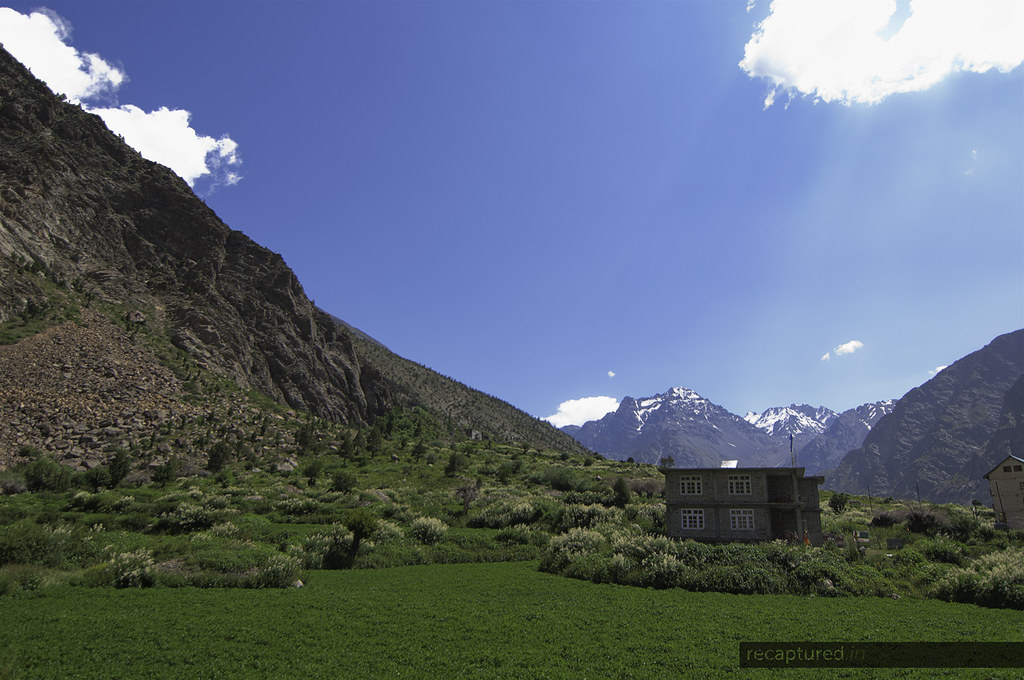 Himachal: if there is a Paradise, it can’t be much different than this. 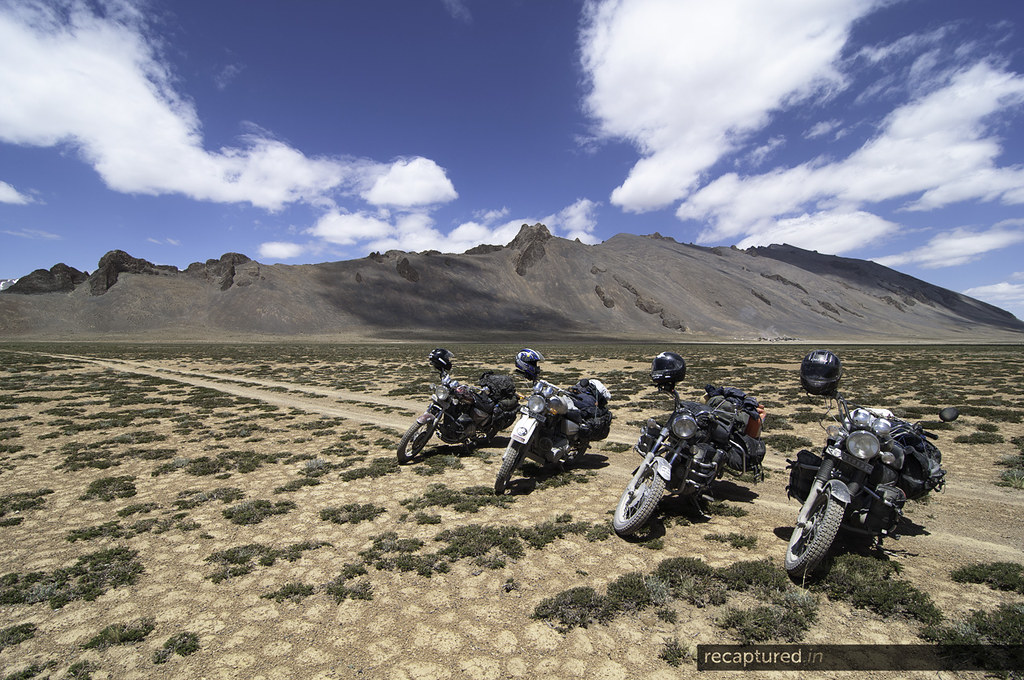 Via Flickr:
While you are crossing las (mountain passes) and other curves and loops in almost impossible to ride terrain at an altitude of 10,000-12,000ft, what do you expect to see?

Well, if you are on your way from Pang to Leh, prepare to be surprised. At this insane altitude you will see this piece of land called More Plains – a desert at 12,000 feet, with absolutely no settlement, no population apart from the people making the 40km stretch of road, and a collection of almost every type of terrain you can imagine as a rider: right from impeccable black tarmac to sand, dirt, rubble.

Day 2 of the trip or day 1 of riding was anything but fun.

The bikes, when being loaded from Pune, were stacked upright – all the weight was being supported by the rear wheels only. We were afraid our engine oil would leak out.

But nothing of the sort happened. What happened instead was a bent handlebar in one bike and a broken headlight switch in another.

After jumping through the bureaucratic hoops to get the bikes out of the station, and getting some fuel from a nearby pump, we went to a garage to get these problems fixed.

The day’s breakfast & lunch needs were satisfied at the garage itself with a few packets of chips and soft drinks.

Finally we began to ride at noon towards Chandigarh. Hardly had we ridden one hour that heavy rains started, and it became severely windy. During the rainproofing at a bus stop we met a few other riders from Bangalore who are also heading to Leh.

After the rains died down, we stopped at Gulshan dhaba for good old rotis, maa ki daal and aloo-pyaaz ke parathe.

The ride after the lunch has been largely uneventful. We passed through many places including Ambala, and stopped for good old Punjabi dhaba style dinner (including the oh-so-lovely maa ki daal) around 40km before Panchkula, where we put up for the night.

The Duronto is a very interesting train. Its bogies don’t all look the same. They keep feeding you till you want to run away. The staff is super efficient, and don’t let you keep the floor dirty for long.

Add to it the bunch of cute and noisy kids travelling with us, and you have all of us confused (“Are the vacations not over yet? My cousins/nephews/nieces have started going to school already!”). And that the non-stop train decided to stop at so many stations (technical hault they said, picking up your food they said. Oh yeah? Then why does the curry at dinner taste just like the curry at lunch?). And Siddharth decided to befriend the catering fellow, Praveen Bhai, but still didn’t manage to get us ice creams with our dinner.

The journey was also educative for all of us. We didn’t know, for example, that there’s a show on Star One at 8.30pm everyday except Tuesday, called Pyar ki Kahani, which is about vampires & werewolves (isn’t that so very original?)

And the same little gentleman who informed us about PKK also left us looking for answers when the following conversation happened:
Boy: aap bike chalate ho? (Do you ride bikes?)
Me: yes
Boy: Kaunsi? (Which one?)
Me: Bullet
Boy: kyon? (Why?)
Me: uhhh
Boy: Hero Honda chalao (Why don’t you ride a Hero Honda?)
Anish: (grinning wide) I’d like to see you answer that Amit
Me: (still looking for words)

Day 2 has already begun. We’re off the train, trying to get the bikes off. A little bit of preparations and we hit the road.

The rider in me is itching to do that. I can already see the Karmic cycles churning. This ride is going to be important for me. Delhi has welcomed me. It’s a clean slate once again 🙂

Amit should be sleeping now, because he has to reach the station at 8.30 in order to get the two wheels packed and loaded in the train, but he isn’t.

He can’t. He’s psyched. The countdown has ended. Tomorrow he will board the train that will take him closer to his dreamland.

He’s just done with the packing. A saddlebag pair, a camera bag, a bottle bags pair, and a sleeping bag – that’s all that he’s going to carry, but this will be his entire world for the next 15 days. Oh, and he’s sad that he couldn’t fix his camera’s intervalometer – bye bye stop motion animation and/or star trails 🙁 Well, it can be done the hard way if he exerts himself enough.

But then all that is to be seen once he reaches the destination: Ladakh.

Maybe he will go to sleep now. Let’s see.

Next on the list for Ladakh preparations: lots of things!

So the thunderous three set out in the lanes of Pune looking for these things last to last Saturday.

My tyre fitment ended at around 8.30 in the evening. Wet, dirty and tired, I figured I had to cross the city now, with a backpack full of spares, tools & ropes of various kinds, plus I had to carry my old tyres+tubes back as well.

We kept one tyre+tube set on my rear seat, placed the other one on top of it and tied them to the bike with the newly bought rope. That wasn’t the tough part. The tough part was sitting on these tyres and riding the bike all the way home.

After reaching home, I needed a shower and something to make me forget the pain of the day. So I got that something. Will tell you some other day what it was 🙂